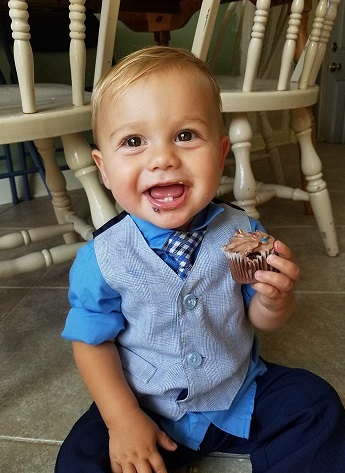 I think there are times when I take my world too seriously. I find it difficult to find a reason to just smile. It is not that I want to feel a lasting joy that spreads throughout my life. I just want to be able to take a little break from everything and smile. Some days it is not too easy, like Mondays, or to be more exact, Sundays looking forward to Monday.

It is so easy to make the negative issues of this world my focus. I think the world is just getting worse and worse. And while I know that the sin in the world is increasing, I also know that God is till in charge and as such, there are blessings, even if it is a simple cupcake or the smile that accompanies it.

When I take a closer look, as close as within my own family, I find more reasons to smile. I mean just look at these three. Obviously there was something more important

than the Olympic Games that drew their attention–except one who does not at all look like he was planning something a little, devious? Maybe I should more often look for some opportunities to just fool around a little. Nothing too troublesome, just less serious than world problems.

How can I not be tempted into clowning around a little with these three nosing their way into my heart? Sometimes I need to look at the smaller less significant parts of life that can make me smile. Even if it makes me look a little silly at times. 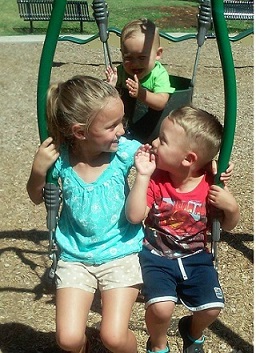 How could I not want to be in the middle of this conversation and be able to laugh at the hilarious secrets they are sharing? Maybe I need to listen more to the lives of others and the good they are experiencing to give me a reason to smile. I can even take the time to applaud them for their success.

I have other grandchildren not pictured here. They are all in their teens from 13 through 18 and they all make me smile. But as teens, they seem to enjoy avoiding smiling on command, like “Smile, Grandpa wants a picture.”

Someone once told me the books you read can affect your mood. I read a lot of different types of books. Some of them are professional, supposedly to develop expertise in an areas of my life. To be honest, I must pick some really heavy reading because I find the subject matter slowly pulling my eye lids closed. Sometimes I read Christian mysteries that tell the story of Christians struggling to make God-pleasing choices as they face life challenges.

Most recently I have been reading a classic. Well, the title is almost a classic. It is titled Of

Moose and Men. This is one book that does make me smile. It tells the story of Torry Martin who describes himself as a “comedian, actor, writer and hippie.” Of Moose and Men follows the journey of Torry and his friend Doug, as they move to the wilderness of Alaska searching for “life’s big questions.”

Torry finds himself in many unusual situations during this search for answers. He saw a reindeer outside his small cabin. Torry tried to befriend the animal with a carrot for lunch, but soon found himself trapped in a corner of his small kitchen by the same reindeer.

Not having a lot of money, Torry and his friend attempted to conserve the funds they did have by turning down the heat at night. A couple of times the result was too effective as Torry occasionally woke the next morning with his head frozen to the floor. He also managed to have a moose gets its head stuck in his cabin window and was once chased by a bear down the runway of a small airport as he attempted to board a plane.

Torry, never one to hide the fact he often managed to put himself into embarrassing situations, shared about a time he went to Colorado to attend a Christian comedians conference. To this day, he is still plagued by doubts about his own abilities and self-worth. But on that day he put aside all his fears and walked right up to the singer Amy Grant. After introducing himself and even having his picture taken with her, Torry attempted to tell her how beautiful she looked but somehow the compliment came out as, “You look as thin as cardboard.”

I must admit I smiled a lot as I read this book, in fact I often found myself openly laughing. But something was growing in Torry as he encountered all of these adventures–faith in God was beginning to glow. Throughout the book, he applied the challenges he met with how God was using them to open his eyes. To quote Torry on p.220, “I was dead when I left California and the party-hard lifestyle in the acting scene of Los Angeles. When I moved to Alaska, I found the total opposite of the glitz and glamor and decadence of Hollywood. I found the polar opposite, you might say. I found God.”

What made me smile the most came next in the book. Torry could see how he was being led in his life, however, he could not understand why it was happening. But as he was directed to the Bible by others he met, Torry came to understand that he was a sinner. As a sinner, he would never meet God’s standard of perfection in his life. He also learned and came to believe in the saving work of Jesus on the cross. Torry did indeed have “life’s big questions” answered.

I looked for reasons. And I found my grandchildren who can always get to me. Even better, they know Jesus is their Savior. And then there is Torry who went on a journey to find the big answers and he too came to know Jesus. Better yet, he lives his life as a Christian comedian with the mission of introducing others to their Savior–and my Savior too.

So now I am done. I think I will just sit back–and SMILE!

Hope you come back sometime. I will wait you.

This site uses Akismet to reduce spam. Learn how your comment data is processed.